POH A Valuable Resource for Day of Remembrance

Two high school history teachers from the Ottawa Carleton District School Board recently brought Project of Heart to 60 students from across the National Capital area who had gathered to learn about genocide. 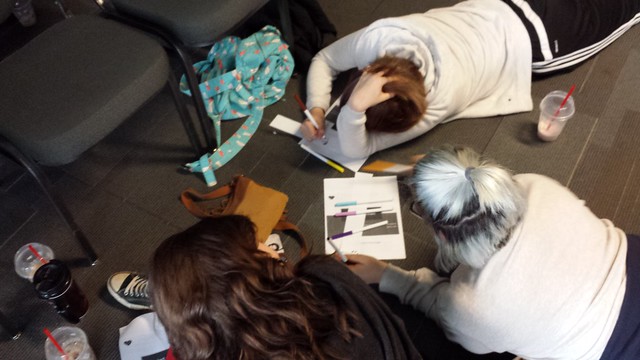 Kim Bruton and Amanda Anderson were presenting at the 3rd annual National Day of Remembrance and Action on Mass Atrocities Youth Conference at Carleton University in Ottawa. Project of Heart was invited to be part of the day’s program in order to recognize the Indian Residential School era and the vast number of Indigenous children affected by Canada’s “hidden genocide” – a cultural genocide which was meant to “kill the Indian within the child”, and that all too often killed the child as well.

Describing the Ottawa students, Bruton reported that “they were a great group of kids who took it so seriously.” Anderson and Bruton wanted to encourage the learners to do something concrete that could actually build trust between settlers and the FNMI people of this country. With that understanding, Bruton added, “We compiled an Action Package that they could take home with them to start a POH club at their own school.”

Many thanks go out to Kim and Amanda, the participants in the workshop, as well as the organizers of the conference for making this a memorable experience, and one which will further greater awareness and the importance of students taking action. In the words of Dr. Cindy Blackstock, “Reconciliation means not having to say sorry twice” and to do that, change is a must.

For information on Canada’s role in omitting parts of the Prevention and Punishment of Crimes of Genocide when it was implemented into Canada’s criminal code after world War 2, please read http://www.dominionpaper.ca/original_peoples/2006/10/12/like_weeds.html

This website is hosted and supported by the University of Ottawa and the Faculty of Education as part of its memorandum of understanding commitment to the National Centre for Truth and Reconciliation.
© 2022 Project of Heart Ontario. All rights reserved / Projet de Coeur Ontario. Tous les droits sont réservés.